Alki Beach has been a major party beach in the Seattle area for more than 50 years.

As a result there is lots of glass to be found here but it is mostly of the green brown and clear (frosted) varieties.

You will occasionally find green/blues from broken electrical insulators or other "industrial" trash.

Parking is plentiful and free along the waterfront and there are numerous places to eat or wet your whistle before, during or after your search.


How would you rate this beach for sea  glass?: Fair (3-5 jewelry grade pcs. found per hour)

Note that it does get sunny and beautiful...but it is also great when it's like this. You know the rewards: a small cafe, Seattle espresso, bagels with cream cheese.... 
Some consistent wave action is needed to tumble glass shards to the point where they become nicely-frosted and rounded beach glass.


The Puget Sound, where this glass is from, does not receive a lot of wave action, so the rounded glass in this photo has got to be old - less waves, longer time needed.


From the official study done by the US Navy:


"Wave motion in the waters of Puget Sound is limited by the complex shape of the geography of the Puget Sound basin. Straight line distances are relatively short, so wave generation is restricted due to lack of fetch. In general, wave heights in most of Puget Sound are limited to approximately six ft with gale force winds (34-47 kt)."


Note that with rare gale force winds, some waves are generated, but this is infrequently.


Nicely-tumbled and frosted sea glass is found much more commonly when prevailing winds consistently blow over a water surface of at least 25 or more miles.

Although Alki Park is exposed to a greater stretch of water than that to the north, the prevailing winds are from the southwest or west, where distance is restricted.


The catch shown, again, would logically be much older glass than is usually found in similar sea glass elsewhere.

The infrequency of waves means that it would take a significantly-longer time for the sea glass at Alki to reach a tumbled state that at a more exposed beach.

Scroll Down for Comments 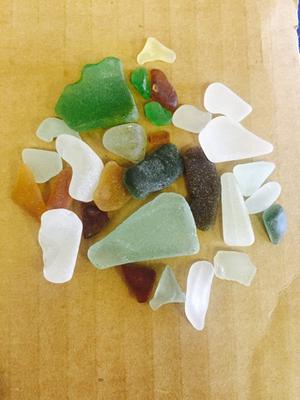 Join in and write your own page! It's easy to do. How? Simply click here to return to Beaches Your Favorite.