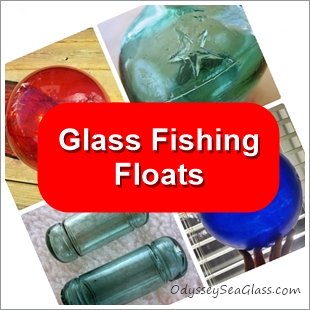 This is the first in a three-part series featuring Stu Farnsworth.

Stu Farnsworth has been an avid beach comber and collector of glass floats (fishing floats) for well over 30 years. He has a love for his hobby and the ocean and enjoys communicating with fellow glass fishing float collectors AND sea glass enthusiasts like us.  Not to mention he is one great guy!

Stu and Alan D. Rammer are authors of the definitive glass float book, Glass Fishing Floats of the World - The Collector's Price Guide and Identification Handbook.

What does this have to do with sea glass?  Two things: First, that beautiful color of sea glass you find might have come from one of these glass fishing floats.  Second, if you are on the Pacific Coast, keep your eyes open for these amazing treasures also!

Lin interviewed Stu and you will be fascinated by his stories.... 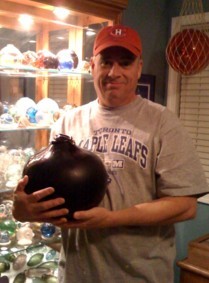 Lin: How did you become interested in collecting Glass floats, about how old were you? Who got you interested?

Stu: That is a great question. I was 10 years old at the time. My father was a bank auditor and would audit most banks in Oregon while I was growing up. He would stage his week-long trips to the beach so that we could make a vacation out of it.

One spring while we were in Newport, Oregon, my dad was at work and my poor mom was going nuts being cooped up in a motel with 3 boys. It was rainy and windy.

She finally said we should go to the beach to look for glass balls, something my grandmother had found while living at Cannon Beach. My mom knew a little bit about them, so off we went.

The weather was wild, and we were not really dressed for this type of thing. I was the crazy one who loved being out in the wild weather while my brothers could have cared less. It was so much fun to be soaked to the bone.

We found nothing but adventure that day but the seed was planted as far as I was concerned. 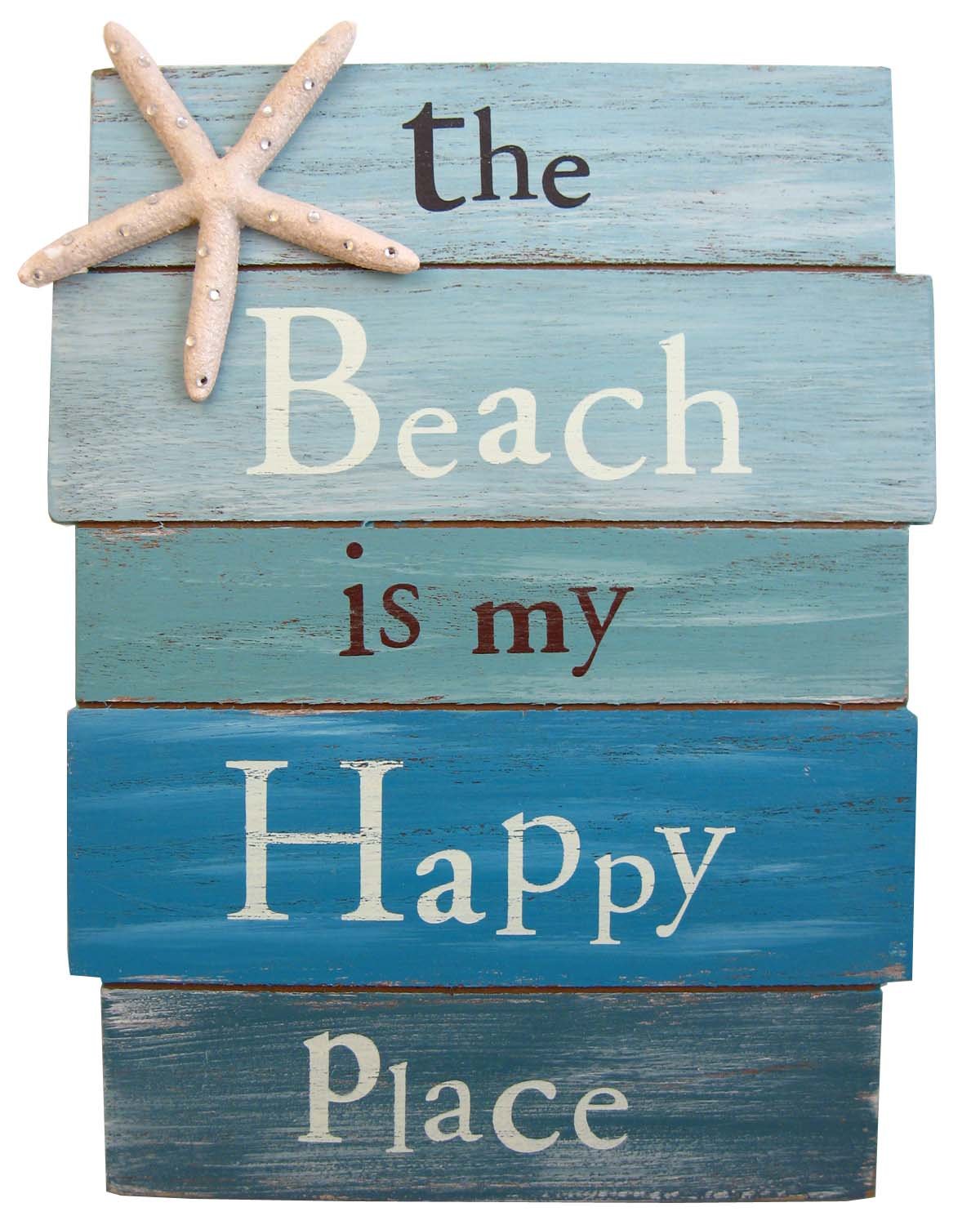 Check out this Amazon deal:
"The Beach Is My Happy Place"
Plank Board Sign

Many years went by and I concentrated more on playing hockey until I met my wife.

Her grandparents lived in Netarts, Oregon, right on the beach. We used to go down there all the time to stay.

They had a gift shop with glass floats her grandfather had found over the years, as he was quite the beachcomber.

One float that stood out above all the others was a bright orange or red basketball-sized float that her grandmother had found on Sandlake in 1934. This float (shown towards the bottom of this page) had me mesmerized because the color was so beautiful. 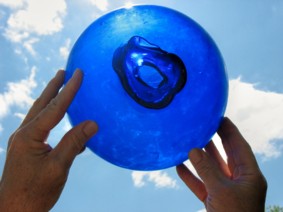 One Friday in mid November 1976, we went down to visit my wife's grandparents, and her grandfather told me today would be a good day to look for glass floats.

The weather was driving rain and wind and cold. We decided to go to Cape Lookout and try our luck.

I must have looked like an idiot in my jeans down there that day. About half a mile down the beach, an older guy came walking back with a gunnysack and asked us what we were doing down there. I told him we were looking for glass floats.

He kind of laughed and told me I needed a rain suit and then proceeded to open up his gunnysack and produce 4 baseball-sized glass floats still with the wonderful smell of just coming out of the ocean. I was so excited that I knew this was for me and that I was going to find one of these no matter what. I didn't find any that day but that day was what got me started.

One morning in the early part of December, I drove from our home in Portland to Cape Lookout State Park in a pretty good storm, this time prepared for the elements.

With a flashlight in hand, I walked the 10-mile round trip.

The first float I found was early in the trip about a mile down the beach. There it sat, a beautiful baseball-sized glass ball. I was like doing a crazy dance and was going crazy like I had found a sunken treasure or something.

Later on, down towards the end of the beach, I found a 14er or beach ball-sized float, which was the most excited I have ever been. Carting it back 5 miles with a 40-mph wind blowing against me was a real treat I'll soon never forget. 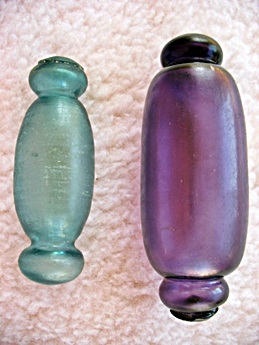 Lin: What is your most treasured glass float in your collection?

Stu: I would have to say with no doubt, it would be the basketball-sized orange float I talked about last question. 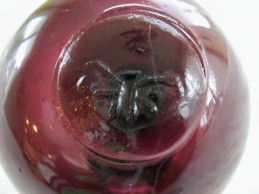 Lin:  I know you've searched the Oregon and Washington Coast looking for glass floats. Have you searched anywhere else?

Stu:  Actually, no. I have searched most of the Oregon Coast with the northern part being my favorite.

Gearhart north to the Columbia River is probably my favorite area.

Cannon Beach to Pacific City south would be my second favorite area.

South of that things start to filter out a bit. You can still find glass floats from the central to the southern part of the Oregon Coast but it does fall off from what the northern part has to offer.

On the Washington Coast, from the northern tip of Long Beach going south to the jetty on the Columbia River is a great area to look for floats but everyone else knows that too.

On the Olympic Peninsula, from Kalaloch heading north is very good for looking for glass floats but pretty hard to get to.

Washington and Oregon have been as much fun as I could ask for.

I would like to experience the Aleutian Islands and beachcomb there.

As far as going anywhere else that would be a fulfilled dream and would be all I could ask for.

Lin: You mentioned in an article that some glass floats were made the size of a basketball. What's the largest glass float you've ever found? 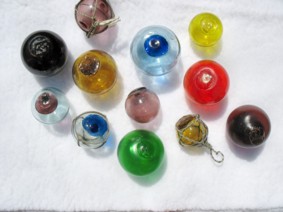 Here is a sample of some of my smaller Color Floats. All are authentic used floats beachcombed.

Stu: I have found them as small as a small golf ball. That is the smallest I have ever found.

I have one in my collection that is about half the size of a golf ball that is an authentic used float.

I have never seen one smaller that I could say was real, but I am sure that it could exist.

Lin:  What's the rarest glass float ever made?

Stu: I don't think any serious glass float collector could answer that question. I am sure there are several out there that have never even surfaced that are one of a kind.

I can set some examples of what would be classified as being the rarest.

One can be seen in Marsh's Museum on Long Beach Peninsula. It is a basketball-sized float with a blue seal button and a tube going through the float to put a net through, plus it has embossed markings such as red, purple, orange, black, cobalt.

These floats with embossed markings are a few that would be held in high esteem. 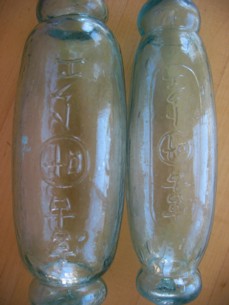 Rollers with side-embossed Kanji writing are always high on a collector's list. The mind can only wonder what is out there that has not surfaced.

This mark is one of the more rare marks and not very many exist. The float that my wife's grandmother found would be classified as one of the rarest.

My wife remembers this float being in a wooden storage chest and only brought out during special occasions. 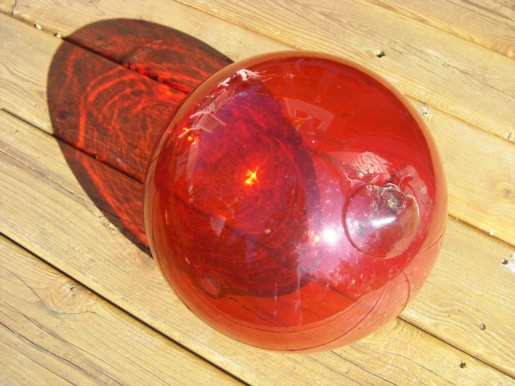 This float was found while my wife's grandparents lived on a farm on Sandlake, which is north of Pacific City.

One spring day her huband was down on the beach cutting up firewood. Her grandmother went down between hailstorms to bring her husband lunch.

As she came around a log, there the float was shining in the sun sitting there on the beach still wet with foam. It looked like a giant ruby sitting in the sun.

She screamed so loud her husband came running down the beach, as he could hear her screaming above the pounding waves. He saw her standing, shaking, and staring at the float in shock.

This now sits proudly in my collection given to us by my wife's mother.

One wonders if it could be from the Emperor's fishing fleet, if such a thing ever existed; it sure has the royal colors. If only the glass could talk and tell its history. 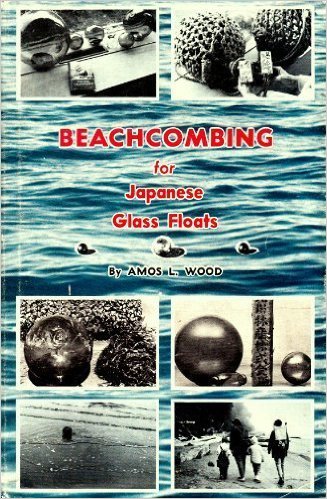