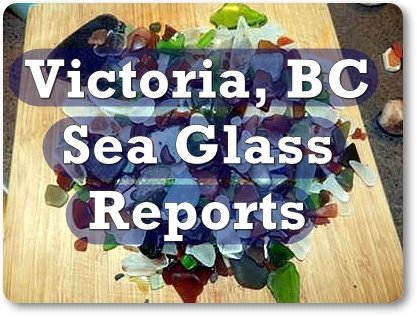 Lin and I have lived off and on across the strait from Victoria, BC, In the Port Angeles area of the Olympic Peninsula. We only were able to go to Victoria once and didn't have a chance to explore the beaches - but we found the city very attractive and still have plans to return sometime in the future - especially with sea glass in mind.

Here's a video of looking for sea glass in Victoria itself and below are links to reports from in and around the Victoria, Vancouver Island Area.

The video doesn't identify the exact beach so a little exploring is needed.

From Port Angeles, Washington, USA, Victoria is a 40 km (25 mi) ferry ride across the  Strait of San Juan de Fuca.

Good sea glass is found in the area of Victoria, as the strait is big enough to allow ocean swells in from the Pacific and open beaches on the south and west sides of Vancouver Island have some great sea glass.

The type of beach shown in the video is just like what we found in Port Townsend Glass Beach area and the finds are very similar. We would love to have some more reports if someone can find this particular beach :)

Share your Sea Glass and Beach Reports from Canada:

What colors you found and a description of the glass.

Include some good photos if at all possible.

Reports without photos leave a lot to be desired and there's a chance they won't get posted.

Other Sea Glass and Beach Reports from Canada

Click below to see contributions from other visitors to this page...

Spent several months collecting glass at our newly found beach. Quite tricky to get to - you need to time the tide and plan on spending several hours as …

Been collecting sea glass from southern Vancouver Island for over 5 years now. Yesterday's find was a first. Anyone have any idea on the blue glass …

For the above reasons, we try to verify these Sea Glass Reports with actual photos whenever possible.

So take your camera to the beach! and be sure to report your Sea Glass British Columbia's Vancouver Island!