On this page, you'll find out about:

From what we've researched, heard from others, and found through experience is that true "black" glass is almost impossible to find.

Well, not impossible. Just very hard. We'll talk about why farther down the page.

What Is Black Sea Glass?

The term "black glass" (also called blackglass), as used frequently by sea glass collectors as well as collectors of bottles, insulators and some other old glass products, often refers to glass that APPEARS to be black.

Here's an example of some "black sea glass" from Italy. 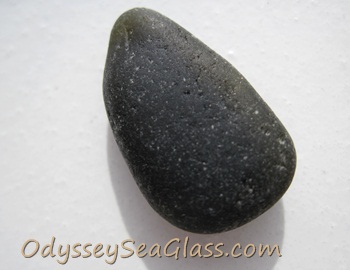 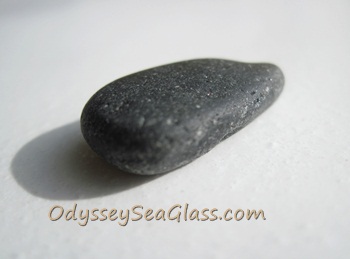 The common name "black glass" is perfectly fine to use when referring to glass that appears to be black to the naked eye.

This very dark glass, though, when held to bright light, shows that it is actually colored. 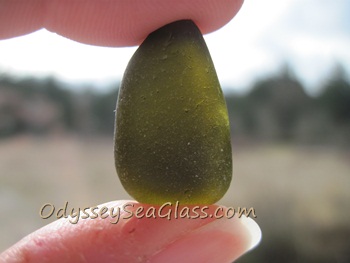 This same sea glass from Italy appears black until held up to bright light, as Lin is doing here.

"Black glass" in many cases is a very dark olive green. However, it can also be a very dark shade of purple, red, blue, or brown.

In the next photos, the "black sea glass" is a somewhat lighter shade of green, which can be seen when the sun shines through it. 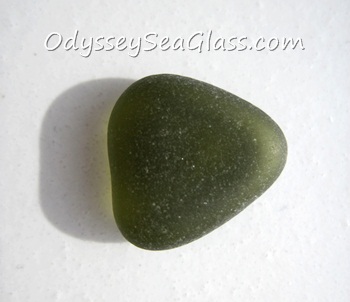 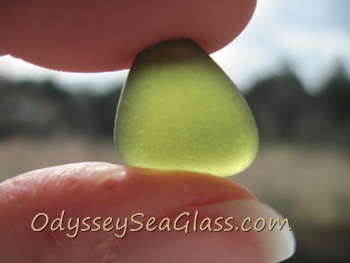 In normal lighting, this piece would be considered "black glass," while it's actually a dark shade of green. 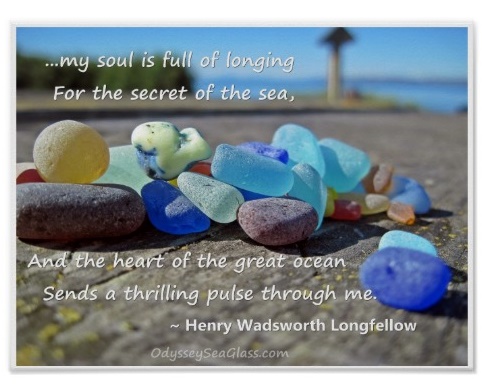 "Black glass" of dark green or dark brown has in fairly common use for bottles for many centuries. However, these colors are somewhat rare to find in a sea glass collection. Why?

Well, for one very good reason at least - it's very difficult in normal lighting to tell the difference between a piece of very dark, frosted sea glass and the pebbles or rocks on the beach. Add some seaweed and shells and your eyes are going to have a a lot of fun trying to pick it out.

***  When we have found black glass, it has NOT been because of the color; rather, it, just "looked" like sea glass.

After searching for sea glass on many trips to the beach, your eye begins to catch not only colors and shapes but will start to catch the type of frosted or pitted surface found almost exclusively on sea or beach glass.

So, in spite of being the same color as everything around it, your trained eye may still "fixate" on that object. *** 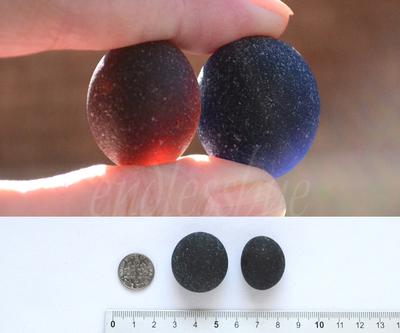 Much of the "black glass," or very dark glass, that ends up as tumbled, frosted sea glass was originally from bottles containing fluids that could be damaged by exposure to sunlight. This was most important one hundred years ago before refrigeration existed and before the "sophisticated" preservatives that are now widely used.

In many cases medicines and chemicals or even beer and wine had to be transported and stored for long periods of time in less than optimum conditions, and dark, thick glass was one of the best ways to insure conservation of the liquid the bottles contained.

(One of the biggest "black" sea glass producers were electrical companies, using a type of black material called vitrite (see more) for insulators.)

Summarizing this information, then, we can say that black beach/sea glass is fairly rare among collectors for at least these two reasons.

More About the Use of Black Glass in Bottles

Strength - Most of the old black glass bottles colors are due to a high concentration of iron oxide, either naturally found in the sand used, or added during glass production.

Some glass was made by adding iron slag, which produced a stronger glass more resistant to shattering; another reason for using black glass for bottles subject to harsh conditions in centuries past.

You might compare the strength of this "fortified" glass to some other glass colors. Colors such as blue, green, brown, and red were generally made by adding metals or combinations of metals. The strength of the glass was affected by how the metal used reacted with the other ingredients in the glass-making process.

*See more about this color at the Society for Historical Archaeology

From what we've seen, the very dark "black" sea glass is more resistant to breakage, and very dark colors (with the added iron slag, etc) result in finds of some pretty hunky old sea glass.

The center for glassmaking from the 14th century was the island of Murano in present-day Italy, where many new techniques were developed.

Murano became the center of a lucrative export trade in dinnerware, mirrors, and other luxury items.  Black glass was called obsidianus after obsidian stone.

Milk glass first made in Venice in the 16th century included black glass.

Influenced by the milk glass from Venice, Opaline glass was a decorative style of glass made in France from 1800 to the 1890s and colors included black glass.

Some Depression glass was black.  This was dinnerware and related glassware, not bottles. For example, this flower arrangement bowl. 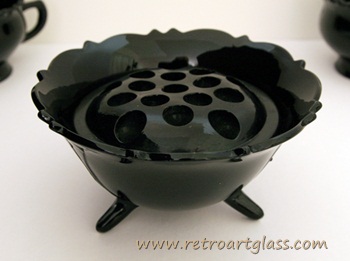 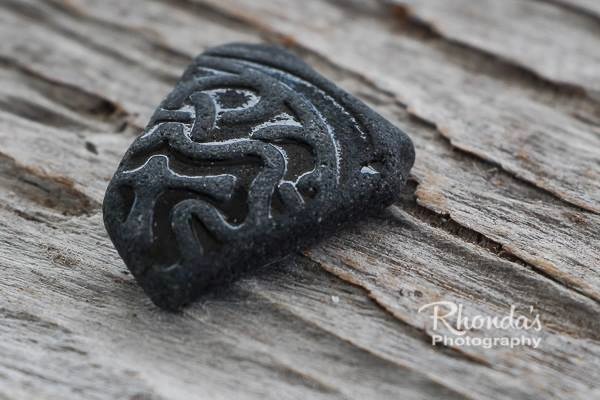 Other agents used to produce "black" glass are:

Is this Black Glass? 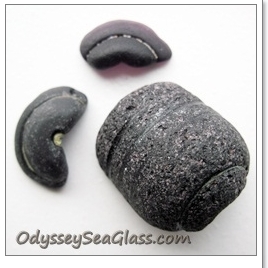 Black Sea Glass with a C