March 28th, 2009 - Can you recommend any beaches near Santa Cruz, California?

Your question and report started me reminiscing on the years I spent in Santa Cruz. I went to high school in nearby Los Gatos during which time, I learned to surf in Santa Cruz.

in 1972, I moved to the Santa Cruz area, where I lived, surfed, and played guitar in popular local bands for the next 10 years.

However, at that time I didn't know anything about sea glass - that was after marrying Lin (while living in Hawaii) and another story.

More to the point, right in Santa Cruz, there has been sea glass reported at Rockview Beach as well as beaches in the Eastside and nearby areas like Seacliff, Capitola, although the stretches of long beaches to the southeast tend to only have sea glass at the few times when the sand has been waves along the rocky parts.

Scroll down this page a little further to see added comments by other seaglassers.

Also, you can our list of pages on California sea glass by clicking below. 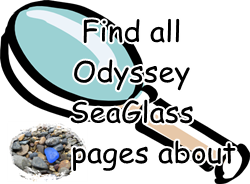